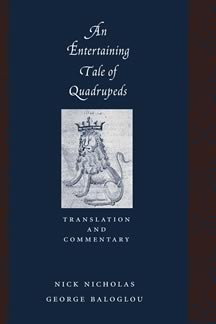 The Entertaining Tale of Quadrupeds (Dhiighisis Pedhiofrastos ton Tetrapodon Zoon) is a fourteenth century Byzantine poem in vernacular Greek. Around 1100 verses long, it tells of a convention of animals, in which each beast vaunts its uses to humanity and denigrates its partners, ending in a cataclysmic battle. George Baloglou and I have been working from 1995 to 2001 on a verse translation, introduction, and commentary on this work, dealing inter alia with lexical issues, contemporary references and realia, literary structure, and the extent of learning displayed by the author. The book was published in 2003 by Columbia University Press.